Bli Bli at the forefront of major housing Growth

IT’S no secret that the once sleepy town of Bli Bli has been transformed into one of Queensland’s leading property hotspots.

The town has been at the forefront of residential property growth on the Sunshine Coast in recent years with Parklakes I, Parklakes II, Halcyon Lakeside, Halcyon Landing and Cutters Ridge housing estates all popping up to create a burgeoning community.

“With new housing developments such as Parklakes II and Halcyon Lakeside we can expect in the short term 850 new dwellings,” he said.

“There are also applications in council for another 380 dwellings.

“This equates to growth in the vicinity of 40% which is substantial when taking into account any other development in the history of Bli Bli.”

Mr Hackenberg said Bli Bli had been “overlooked for many years” but had finally hit the Sunshine Coast radar for investment.

“The location, without a doubt (is a drawcard), he said.

“It’s the centre of the Sunshine Coast and we’re only minutes away from major shopping and our beautiful beaches.”

“That caused people to find Bli Bli and they’ve realised it’s a nice place to live,” he said.

Mr White is the developer behind the push for the new Bli Bli Village Centre on the corner of Bli Bli Rd and David Low Way.

He hoped to see construction on the development get under way in the next few weeks.

“Bli Bli has never had a town centre and that’s why we started the village development, so it will have a heart or village centre,” he said.

The Bli Bli Village Centre will be built over 8000sqm in three stages. 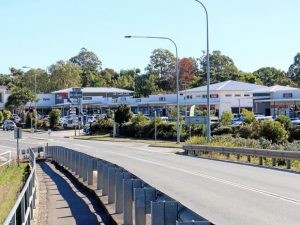