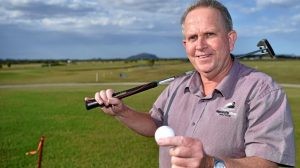 Bli Bli may have a new tourist attraction in place for Christmas with Maroochy River Golf Club set to proceed with a plan to tap into a booming pastime that plays to its strengths.

Members voted on Tuesday night to expand its David Low Way facilities to include an 18-hole miniature golf course, estimated to cost up to $1.25 million followed by a nine-hole pitch and putt course and a par three nine-hole course.

Club president Michael Gray said the goal was not just the revenue but to also offer different entry points to the game and to allow members to retain a whole-of-life involvement with it.

What’s proposed and would now be the subject of a development application to Sunshine Coast Council was a sophisticated putting game for all age groups that bore only passing resemblance to the clowns and windmill old-style mini and crazy golf courses.

“We’ve got a great championship golf course, which is the premier course on the Sunshine Coast and getting better all the time,” Mr Gray said.

“But it’s not suited to all levels of play. Potential members can find the course daunting.

What’s proposed for Maroochy River was an 18-hole, 2500sq m layout of which 1100sq m represented playing surface with the rest a landscape of babbling brooks creeks and other landscaping.

It meant each hole covered 60sq m and offered both risk and reward.

Open for Business in Bli Bli – Moving into Town Centre